Well, I got the Apple Watch. So far I'm very impressed with it. 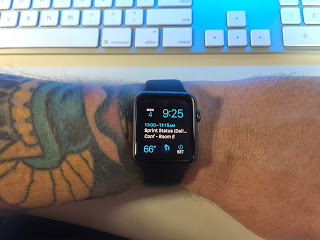 First read this article at iMore for more info on the issue.

In summary tattoos can interfere with the green light used for heart rate and security. My watch shipped the day this information started being discussed. I was worried that the issue would be bad enough for me to have to return the watch. I probably would have just turned off several features and kept it.  But, I really did not want to have to make that choice. 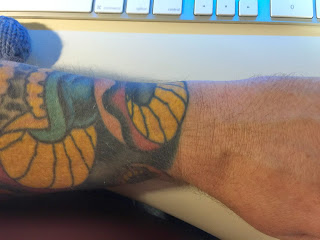 I have had no issues that I think were caused by my tattoos.  It is possible that it is detecting my heart rate incorrectly.  But, it seems consistent with values I have gotten from other sources.

I have had my watch lock while on my wrist twice. The first time was while using the lawn mower. Sweat was involved and I think the watch may have been too loose.  The second time was while sitting idle on the couch, but I had my arm in a weird position and the watch was being pushed away from my arm.

Pairing was easy, I chose to activate all my apps, and this may have been a mistake.  The first 20 min with the watch were slow and irritating. I think the phone was copying info to the watch, but there was no clear indication that this was happening. I got frustrated with things not working and left it alone for about an hour. The next time I tried to use it everything worked great. The setup process needs some work.

I have only had the watch for one weekend, so this can't really be a full review.  However I have found the following things to be true:

It is a great fitness tracker.

I need to calibrate it better for my stride. But so far the way it tracks 'Active Calories' and reminds me to be more active is really helpful.

It is really good at notifications.

It is going to take some time to configure the correct set of notifications I want to go to the watch. I only want 'Important' items to show up there. I only want sound in some rare cases. etc... I will be tweaking these things until I find the right balance. Letting everything through would be awful.

It is good at being a watch.

I like having a watch on.  At a glance information without pulling out my phone.  I wish it had a mode where the time was always visible without the battery cost.  Perhaps a future version will do a better job of detecting the wrist turn.

Some are pretty slow. Some don't really seem that helpful. For instance, there is a Yelp app on the watch, but It doesn't seem to support checking in, which is pretty much the only reason I would use Yelp on my watch. There are other instances of this. I've already removed several apps.